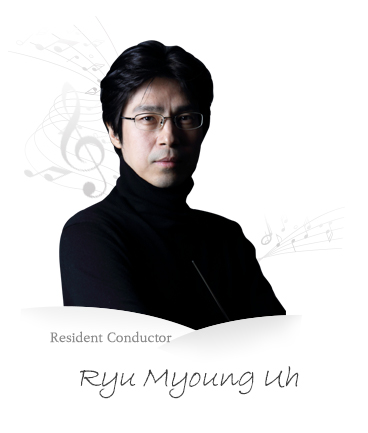 Myoung-uh Ryu had his bachelor degree in piano from Seoul National University and Diplom from Hochschule fur Musik und Darstellende Kunst in Frankfurt, and Hochschule fur Musik in Koln for orchestral conducting. He also participated in master classes of Gianluigi Gelmetti in Accademia Musicale Chigiana in Siena, Italy, and those of Roman Kofman sponsored by Beethoven Orchestra in Bonn, Germany.

His carrier has progressed since his graduation. He served as a Conductor of Music Education College Orchestra at Musikhochschule Koln, Musical Assistant of Sondershausen Summer Festival 2016, Opera Coach of Opera House Osnabruck, Live pianist of the ballet performance 'Ring of Nibelungen' in Opera House Bonn and Conductor of Youth Chamber Opera Koln for operetta 'Orphee aux Enfers'.

As an Opera Coach and Deputy Chorus Master of Badisches Staatstheater Karlsruhe, he has worked on projects including large choral works including Verdi's 'Requiem', and Mahler's 'Symphony No. 8', and over dozens of operas such as Britten's 'Death in Venice', Puccini's 'Turandot', and Strauss' The 'Woman without a Shadow'.