● Login     ● Join
About Us
Composer in Residence 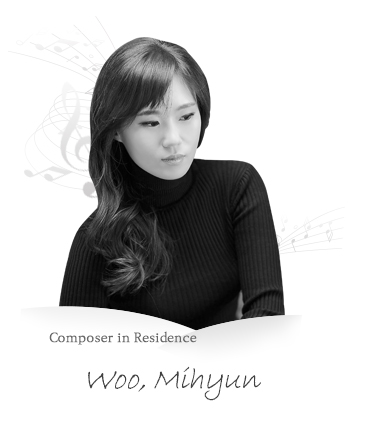 Mihyun Woo received a Ph.D (Composition) at the Royal Academy of Music where she gained a distinction in her MMus degree and was awarded scholarships and the Mosco Carner Composition Prize. Her Recent professor is Simon Bainbridge, Paul Patterson and Michael Jarrell.

Her orchestral piece ‘Macrocosmos’ a commission from the Gorge Enescu Museum, was performed in Romania 4th, November, 2010. A commission is from Royal Academy Symphony Orchestra. It was conducted by Yal Pascal Tortelier, on 21st, January, 2011. Also, one is from London Philharmonic Orchestra. It was performed by LPO at Queen Elizabeth Hall, Southbank Centre on 8 June 2011. Recent concert was with London Symphony Orchestra. Her orchestral piece was performed by LSO and conductor James Macmillan in January 2012. Also one was with Prime Philharmonic Orchestra(Korea) and Korean conductor Kisun Sung at the National Theater of Korea. In the annual contemporary music festival in Vienna, Wien Modern Music Festival 2013, her orchestral piece had been slected and played at the ORF radio concert hall in Austria on 13th,nov,2013. The upcoming event is a commission for the 2015 season of REBUS contemporary music festival which will be held at the Teatro del Verme in Milan.